Holiday Cottage near Whitwell and Niton, Isle of Wight

Great panoramic views within easy walking of your holiday cottage!

The southern tip of the Isle of Wight has the best panoramic views of green rolling hills and white cliffs. The villages of Whitwell and Niton are in a small picturesque hamlet with good local community spirit year round, no winter ghost town here! Well attended pubs and local restaurants make for great, relaxing dining in some of the oldest public houses on the island.

St Catherine's Oratory "The Pepperpot" is easy walking from Kingates Farm Holiday Cottages and maps of a few other great options across St Catherine's Down, including The Hoye Monument are available in your cottage welcome pack!.. 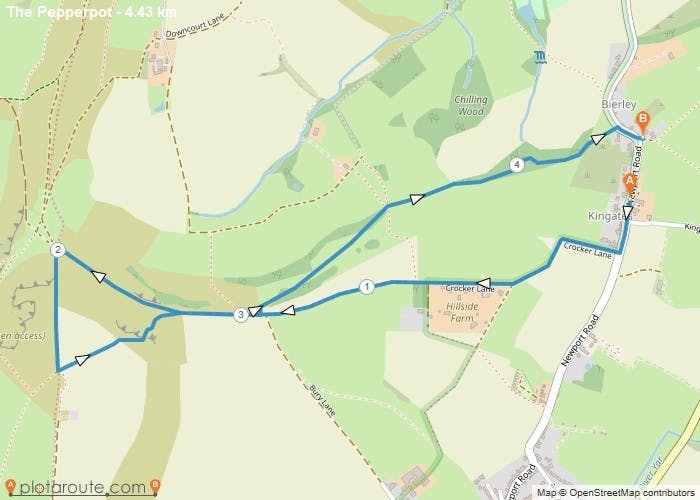 South Coast Access to The Pepperpot
Also accessible from parking on the South Coast Military Road out of Niton towards Freshwater. With miles of beautiful beaches and great fossil hunting oppurtunities including dinosaur footprints, there really are!!

The oratory is a 400-metre (440-yard) walk across fields, parts of which may be uneven. Entry to the field from the car park is via a steep staircase. During the summer season, refreshments can be purchased in the car park and dogs (possibly need to be on leads) are welcome, as farm livestock may be present in the fields around the oratory.

History of St Catherine's Oratory (The Pepperpot)
A tall medieval octagonal tower is all that survives of an oratory, affectionately known as the Pepperpot. It seems to have been used as a lighthouse, and stands on one of the highest parts of the Isle of Wight. It is part of the Tennyson Heritage Coast, a series of linked cliff-top monuments. A later lighthouse can be seen nearby in Lower Niton.

It is likely that the oratory, completed in 1328, was erected by Walter de Godeton, a local landowner who was condemned by the Church for stealing casks of wine from a shipwreck which had occurred in 1314 off Chale Bay. The ship was one of a fleet carrying a cargo of white wine for the monastery of Livers in Picardy. The Church threatened de Godeton with excommunication unless he built a lighthouse above the scene of the shipwreck, together with an adjoining oratory.

The oratory was to be endowed to maintain a priest to tend the light and to say masses for souls lost at sea. The duties were apparently carried out until the Reformation in the 16th century.

Bronze Age Barrow
At a distance of 15 metres (49 feet) to the south-east of the tower is a much earlier monument, a Bronze Age bowl barrow, or burial mound, which was constructed on this hilltop site about 4,000 years ago.

Bowl barrows consisted of a mound of turf, soil or rock, covering one or more burials, and usually surrounded by a circular ditch from which the mound material may have been quarried. This barrow, which is 20 metres (66 feet) in diameter and 2 metres (6 feet) high, was partially excavated in 1925, when human and animal bones and flint tools were discovered.

At some time during the medieval period, possibly during the construction of the oratory, a lime kiln was built into the side of the barrow. To the south are pits and mounds which may have resulted from mining chalk to provide lime for the kiln.

Great walks, historical value and fantastic views... all within walking distance from your holiday cottage!

Thanks for your enquiry!

Tick the checkbox to select properties to enquire about. Dismiss